Download Now $29 USD Only Buy Now How to Works 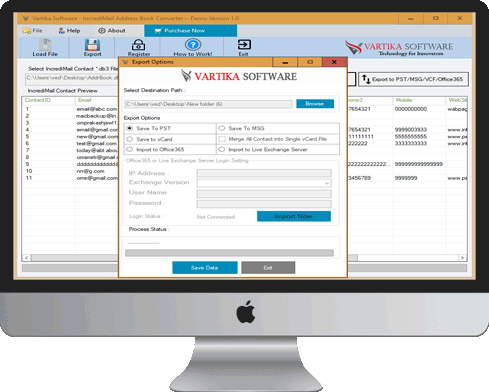 Once you use Vartika IncrediMail contacts converter Software to convert AddrBook.db3 contacts, then there no need to take tension about contacts details because unbelievable feature of software will convert all contacts details like- first name, last name, data of birth, emails address, attachments etc. There no changes would be done by software; the data will be remained same even after conversion.

Vartika IncrediMail address book converter Software is known for its magnificent technique that it uses during conversion time. It is full of magic and enables users to Convert. imm & .iml emails to Outlook (ANSI & UNICODE), MSG, vCard and CSV. Before saving the converted data, you would be getting the live preview of conversion process to satisfied yourself.

We understand the importance of user’s time that is why we have inbuilt selective conversion feature in software. The software will let you select the Addrbook.db3 Contacts from categorized contact list like- Suggested contacts, group contacts and favourite contacts to Export each selected data to PST Outlook file.

Not only allow to Export IncrediMail Contacts to Outlook file, nevertheless let users to Convert IncrediMail Address Book to MSG, vCard and CSV with extract all contacts details like- first name, last name, data of birth, emails address, attachments etc. It is one of the best tools that never harm internal data while conversion.

At the time of using, IncrediMail converter Software you will see the “Categorized Contact Listed” Option where you would be find Suggested contacts, group contacts and favourite contacts list that you can choose for extracting and convert IncrediMail address book to outlook with keeps all emails formatting, emails hyper text and attachments.

If you are making mood to Install this IncrediMail contacts converter software, then you should have knowledge what application is required to use tool. You would be happy to hear there no need to install any third-party application or even IncrediMail to use software to convert addrbook.db3 to PST Outlook.

All emails of IncrediMail are composed with several emails address in it like- To, Bcc, Cc along with images, graphics, hyperlinks and other meta data attachments. The Vartika IncrediMail address book converter Software keeps the entire information intact while Converting. imm & .iml file to Outlook file, MSG, vCard and CSV.

Compatibility only for Windows Platform

Watch Video How to Work! if you any need to customize in IncrediMail Contacts Converter then you can send mail to our support team. support@vartikasoftware.com

Am I Capable to View my IncrediMail Address Contacts in Multiple Email Clients?

Sure, you are capable to view the exported and converted IncrediMail Address Book Contacts in any email clients as the format of all contacts are same for each email client without no problem

IncrediMail email client generate AddrBook.db3 file format for using and the most significant function of AddrBook.db3 is to store the contacts. It acts as the Address Book of IncrediMail Email Clients

Absolutely, this Software will run flawlessly on Windows 10 with no compatibility problems. Advantageous it can run on versions which are beneath than Windows 10 such as Windows Vista, Windows 8.1, Windows 7, Windows XP etc.

Is this IncrediMail Contacts Converter Software Free for use or Some Hidden Charges?

IncrediMail address book converter Software is totally free for trail version that will let you view all contacts of IncrediMail along with its details and Export only 5 contacts from each folder. There are no hidden charges and if you want to restore complete data then you must purchase full version of Software.

Can I export IncrediMail emails to CSV or vCard format?

How many Contacts Can I Export with Software?

There is no limitation defined you can convert ‘n’ number of contacts from IncrediMail to PST, MSG, vCard and CSV format

Last month, when I needed to convert IncrediMail Contacts to Outlook file, then I tried lots of manual methods, but all time failed. I searched on google and found Vartika IncrediMail contacts converter Software that converted my contacts with keeping the elements secure like- first name, last name, emails attachments etc………thanks

Categorically it is laid-back & safe Vartika IncrediMail address book converter solution. I used this tool to Convert IncrediMail Contacts & data into Outlook 32-bit which was pondered for me. Thanks!